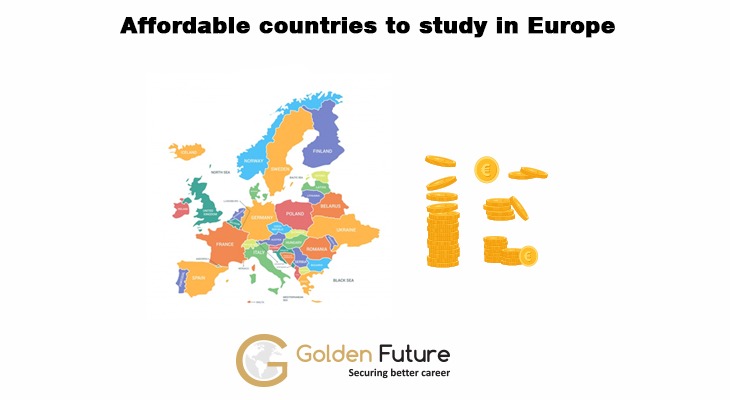 Affordable countries to study in Europe

Studying in Europe has always considered to be a costly affair compared to India. Most parents and young aspirants do drop their plan to study in Europe because of this particular reason. However, we at Golden Future, would like to break the myth and present you some of the most affordable countries in Europe to pursue studies. These countries have less tuition fee and other fee compared to their Indian counterparts and need not to mention the quality of education provided here are much respected across the globe. In continuation of previous article, we gathered information on few more countries with affordable study expenses.

The country is home to Top Universities like University of Debrecen, University of Szeged and Cornivus University of Budapest. Hungary is an affordable country not only for the studies but also for daily living. The number of scholarship packages makes the country more attractive for international students. The local currency, Hungarian Forint is also attractive for Indians which has almost equaling value to rupees. This also makes the living slight easy for Indian students. The average tuition fee is also around INR 80,000/- for an academic year.

Finland is heaven if one wishes to pursue higher education from there. Usually, Finland is considered to be a costly affair when it comes to education for international students but the city Helsinki is one really affordable. Cost of living is low compare to most popular cities like London and Paris. Moreover, if you choose your course and universities with due diligence and with the help of study visa consultants, you may get a chance to land in universities with no tuition fees. Finland has widely respected universities like Aalto University and University of Helsinki. Quality education, bright career prospects and low overall costs are highlights when you pursue your studies from Finland.

What about a semester fee close to 70,000/- in Europe? Norway offers such education with most affordable and best in class institutions. There are number of public universities which offers no fee for international students for post graduate and doctoral programmes. You only need to pay student union fee in these institutions. There are few private universities who charge tuition fee but as compare to their counterparts in other European countries, the fee is much less. International students usually prefers universities such as University of Oslo, University of Bergen, Norwegian University of Science and Technology and University of Tromsø in Norway.

There are more countries apart from the mentioned ones, for higher and cheaper education in Europe. A prospective aspirants are advised to get in touch with professional study visa consultants who can give an appropriate guidance on the subjects. We, at Golden Future, are committed to provide the right direction to such aspirants for bright future prospects. So get in touch with us at earliest for professional guidance and details.